$30,000 to announce that you already live together?

Just read this on Sam Brett's Blog. The quote below is in the comments section of the Blog, by a guy called Steve. It's worth reading:

Honestly? I think a lot of women just want to have a "wedding"; a day for the world to truly revolve around them. I see this all the time. It just seems to me that in my gen (gen Y) the girls have all bought the fairy tale package hook line and sinker. Even smarter women.
I have a mate who's getting married soon, and although he technically asked her, she more or less coached him into the position. She's a modern, capable and smart progressive woman, but she's totally bought all the wedding crap and wants to have this big fancy do.
It all sounds pretty stupid to me... the two have been living together for 6 years, so the wedding really just seems like an overblown birthday party with an expensive fancy-dress theme. Think about it - they're about to spend about 30K to basically announce they're going to be together. Well... we kinda already knew that.
And while I appreciate the sentiment, a smart couple who were confident in the depth of their love for each other would have just gone to the registry and then put that money on a house.

Harsh? But Fair on modern marriage?
I'm marrying young people here at York Street all the time. I like being involved in their lives. More couples are living together than are not. The third paragraph in the comment above is what gets me: the couple have been living together for 6 years, and then they decide to get married in a $30,000 party. Often, the groom will leave their home the night before getting married, to almost simulate what used to happen! That does seem odd. I'm very happy that couples get married, but we have things upside down now.
In the Bible, the movement is: Commit covenantally (vows), then commit domestically and sexually (the last two being in the one act of 'leaving mother and father' - Genesis 2:24).
But today, its reversed: Couples commit sexually, then domestically, then covenantally (if at all).
Does any of this ring true? You got thoughts on modern marriage?
________________________
Pic on Flickr by Janelle Madalone.
Posted by Justin at 12:55 pm 17 comments:

Make sure your acts of righteousness are seen.

We made a discovery in Staff Meeting yesterday. We read Jesus' words in Matthew 6:

“Beware of practicing your righteousness before other people in order to be seen by them, for then you will have no reward from your Father who is in heaven. 2 “Thus, when you give to the needy, sound no trumpet before you, as the hypocrites do in the synagogues and in the streets, that they may be praised by others. Truly, I say to you, they have received their reward. 3 But when you give to the needy, do not let your left hand know what your right hand is doing, 4 so that your giving may be in secret. And your Father who sees in secret will reward you.

It assumes one thing: That it is fundamentally right and good to practice your acts of righteousness in order to be seen and rewarded.
Have a careful read.
In fact, only when we get this right can we be truly freed of the sin of hypocrisy, and of our thirst to be recognised by 'other peeps'.
Get it?
I can feel a C.S. Lewis quote coming...
_____________
Pic on Flickr by Steve Wampler.
Posted by Justin at 12:45 pm 11 comments: 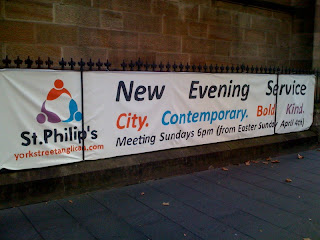 We've had this huge sign on our city deck for a few months now. It says of our New Evening Congregation: 'City. Contemporary. Bold. Kind.'
We like the word 'Kind'. Mostly because that's what people who are caught up in the story of Jesus Christ are meant to be: 'Therefore, as God's chosen people, wholly and dearly loved, clothe ourselves in kindness.'
But also becasue it is actually countercultural to be kind here in the city.
An example: I received this email from person at our New Evening Congregation this afternoon:

Kathryn (not her real name) was sick on Tuesday, and I emailed her to ask if there was anything we could do for her .. she's ok now, back at work, but she said it was the first time in a decade since coming to Sydney that anyone's ever offered her help. It made me think of the evening church word of being 'kind' - Sydney can be quite an uncaring place, Sydney needs Jesus!

LAND and ISRAEL in the Jewish Scriptures

I wrote this a number of years ago in answer to someone who asked about the fairness of the Conquest of Canaan. There is more to say about this. But here are three things about the LAND in ISRAEL and the promises of God in the New Testament:

1. God always intended his people to inhabit a PLACE.

We know from the Story of the Garden of Eden that God always intended his people to live in an environment. A ‘place’. A ‘good’ one. We were never intended for an existence outside of an environment (if that were possible). But it is only ‘good’ when God’s people live in that place under his rule (as God wills it). In the Garden, Adam and Eve did not live that way, and so the whole world is now subject to frustration. (Romans 8:19-20)

The Story of Abraham (Genesis 12) begins a new chapter in God’s redemption of the universe. God said that he would give a particular land (called Canaan) to Abraham's descendants. And in that land, by one of Abraham's descendants, God would bless the whole world (not just that particular land). The New Testament claims that Abraham’s descendant (seed) was Jesus, and in that land, God forgave sin, and provided new blessing to the world, in anticipation of a New Heaven and a New Earth.

So what is the progression from a nomadic Abraham pitching his tents in Canaan to the promise of a New Heaven and a New earth?
As you read the Old Testament, you begin to realize that God is always lifting the sights of the people higher and higher. Better and better. More and more glorious. There would be a land where justice and righteousness always reigned. And you begin to realize that even the land of Israel in the Old Testament was an image, a metaphor, a picture of what God promised to do with the whole world!

The fulfilment of God’s promise to Abraham is in Jesus, who by his death and resurrection, invites us to the ‘New Heavens and the New Earth’, in which sin is dealt with and God’s people live in a land flowing with more than milk and honey!! You can read about it both Isaiah 65:17-25 as well as in Revelation 21-22.

The second thing about the land is this: That God’s intention was not just positive, but negative (although negative is the wrong word). God needs to remove sin and injustice. He needs to remove opposition to him. He is a just God, who cannot stand evil in any form.

So we learn as we read the Scriptures, that God asks Israel to rid the land of all opposition to him. And he asks them to never adopt the practices of the nations around them. That is what is going on in these verses. You can see in Deuteronomy 7:4-5 that the 7 nations who occupied the land were in opposition to the one true God. That is, in part, what the Conquest of Canaan was all about.

‘It’s still unfair’, we say.
But not if the wages of every sin for every person is death (Romans 6:20-23). Take a quick read of Genesis 15:16. There, Abraham is told he cannot have the land yet because the sin of one of the nations living there had not ‘reached its full measure.’ In other words, the conquest that you read about in Deuteronomy is not simply over innocent people and it’s not framed as simply one aggressive nation conquering an innocent one in the name of God. It is, in part, about God’s hand of justice.

The ‘conquest’ also just an image, a metaphor, a picture of what God promised to do with the Devil, with all sin and opposition to him. This is what Christ conquered on the cross. (Revelation 18).

3. God has always been free to GOVERN the world as he pleases.

The last thing to say about the Conquest is this: That God is free to govern people and nations as he pleases. In the OT, God chooses 'little Israel' to display his Glory to the world. In Romans 9-11, God displays his Glory back to Israel by having Gentiles believe the Gospel of Jesus. In other words, these Israelites, the Canaanites and all people are guilty of sin, and God will be glorified!

God’s Grace is the only possible salvation for anyone to enter the fulfilled ‘land flowing with milk and honey’.

Help me with Divorce (and Marriage and Remarriage) 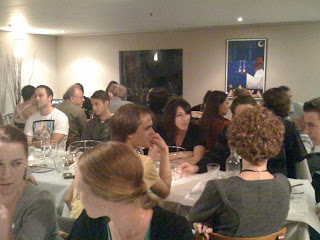 So...
I want to get this one right.
And it is not easy.
_______________
Pic taken from my iPhone of Evening Congregation out for dinner last night. A local city restaurant opened for us, and about 75% of the congregation came. It was fun. They had to find more seats and make more food!
Posted by Justin at 12:43 pm 19 comments: