Kyle, Jackie O and the smell of hell 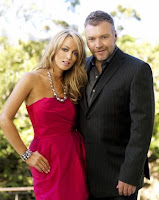 My latest post on Sydney Anglicans, for people who don't want to comment there:
Kyle and Jackie O were suspended indefinitely from 2DAY-FM yesterday after last week’s lie detector stunt.

In what moral universe does interrogating an underage girl about her sexual history, while she’s hooked up to a polygraph and sitting in front of a live microphone, strike anyone as anything other the basest, most grotesque and abusive form of media exploitation imaginable?

There were so many things wrong about the stunt that it is hard to know where to begin. So I read secular articles, opinion pieces, and blog comments from the Australian public to see what they said.

There are at least ten things about the stunt that smells like Hell, even to the public:

1. Placing an underage girl on the radio and interrogating her about her sexual history.
2. Doing this for the purpose of entertaining the public.
3. That her plea “I’m scared ... it’s not fair” was not enough to pull the stunt in the first instance.
4. That a mother brings her daughter to a radio station to ask her about sex and drugs.
5. That lies exist. (Why do we live in a world that has lie detectors?)
6. That this kind of stunt has happened before, and Kyle and Jackie O did not learn from it then.
7. The glib response of Kyle when after the revelation of rape: “Right, is that the only experience you’ve had?”
8. The rape itself (Police are investigating the claims.)
9. That the mother knew about the allegation a month before and still brought her in.
10. That this stunt is like so many other sordid ones that Kyle and Jackie O have done with the lie detector.

But perhaps the greatest smell of hell is what all this says about the listening public. One Blog Comment by ‘Dirk’:

YOU got what you wanted – now what? WE are the ones who endorse a gradual degradation of sensitivities…. This is what we asked for: a constant erosion of moral behaviour by clowns that push the boundaries of ethics. Everyday. … As I said – we elected a pig like him to represent our need for entertainment.

When it’s obvious, sin, injustice and bullying are named. And then shamed. And I’m glad that this is the case on obvious things. Like this stunt.

We had this verse preached on Sunday and it rings true here;

"9Having lost all sensitivity, they have given themselves over to sensuality so as to indulge in every kind of impurity, with a continual lust for more."

I was only thinking when watching the TV the other night that 10 years ago (maybe a few years more), atrocious profanities, were not heard on TV. They were muted out of movies. But nowdays I dont think anything gets muted out, after 8:30, I guess.

But what happened? Why did this change? Why has society disintegrated to such a state where this is now acceptable.

You could say the same for allot of things I am sure.

But I dare say its due to "our" "continual lust for more."

I don't quite understand how this was a "stunt" or how it's all about this one incident. For the most part, it's just like the "stunts" that form the staple of many day-time tv shows, except that not everyone seemed prepared for the turn it took.

Thanks for this. Lots to ponder.

good summary of the whole deal. I feel like the young girl deserves an apology at minimum and some guardians who will protect her best interests.