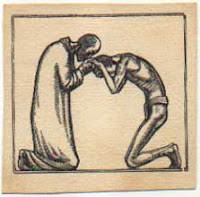 (First read the Introduction and the TEXT: Luke 16)

There are at least four surprises in the story.

The first is this: Because you know the gospel, you expect the crook to throw himself on his master’s mercy and find grace and forgiveness. Just like lots of stories in the gospels (and of Luke in particular). A classic example: the woman who wipes Jesus' feet with her tears. (Luke 7)

That’s what you expect. But instead the crook capitalizes on his master’s apparent stupidity. And then … he totally lucks out.

It’s like the synopsis of a Woody Allen film.

V1 –“Then Jesus said to the disciples, There was a rich man.”

He is very very rich. The sums he’s lends out are ENORMOUS.

The rich man has a ‘manager’ – literally in the Greek – he is the ‘economist’ – a ‘Supervisor’ of the household -- in charge of all his master’s affairs. He’s the ‘Super’ (For our US readers). But he’s been doing deals with the money and squandering the property that doesn’t belong to him. (V1).

He is Jeff Skilling from Enron.
He is Marc Rich with the US taxpayer.

So how do I know that we EXPECT the story to go the normal route of forgiveness and grace?

A similar phrase “squandered his property” V1 has been used in the parable just before this one. In that case to the Prodigal son, who squanders his father’s property, discovers he is in a bad way, and he says “What will I do?” And then he throws himself on the mercy of his father; who then embraces the prodigal.

But you’ve just read the story – It simply doesn’t end that way.

So the second surprise is...

Was this talk recorded? Can you post after all the surprises have been revealed?

Jimmy. No, it wasn't recorded. WOrds are mere Hebel anyways, until the Spirit does his work...

Of, and something else:

There are 4 surprises in the story.

Then two points of application. The talk is about 15 minutes for the surprises. 15 for the 2 points.